The week of March 18th Joe and I spent a fantastic time in Kissimmee Florida and no we did not go to Disney. I would not have minded, but at $109 per person per day we simply could not afford it. I do not know how families go there!! It has to cost a small fortune and a small fortune I do not have. So no Disney this time. Special thank you goes to Joe’s family. His mother was wonderful and bought our plane tickets and his aunt let us stay with them on their timeshare. We could not have afforded this wonderful trip without them and are incredibly thankful to them.

We arrived Friday March 15th at 10 PM in Orlando on my very first airplane ride. I was surprised I did not get airsick at all. The turbulence was a little scary, but I feel like I handled it like a champ! (According to Joe I was a little silly). We stayed at a nice little hotel next to a 24 hour waffle house. Of course we couldn’t resist going there for a midnight snack. Joe got a waffle and I got fried eggs with whole wheat toast. The next morning we had a lovely continental breakfast. While Joe’s mother, father and sister finished getting ready we sat by the pool and drank coffee. Once everyone was ready we hoped into the car and went to join the rest of the family at the timeshare which happens to be on Orange Lake Resort! I am not sure of the cost, but if you can afford it I recommend this resort. It was wonderful!

While Joe’s Uncle Leah took care of getting everyone all set for the staying at the resort the rest of the family got a yummy lunch at Breezes. The food and atmosphere was great, but I have to admit their staff needs some work. It often took time to get attention and twice parts of orders were forgotten. However, they were very good about correcting the issues! After lunch was done we were able to check into our rooms and start enjoying the lazy pool river and other amenities offered. I unfortunately discovered both swimsuits I brought down were too large. Good that I lost the weight, but I did not want to buy another top. So, I decided to wear the suit. However, after nearly revealing my breasts to children after going down a slide I decided it would be wise to invest in a new suit.

The resort has four pools total, a large blow up slide, a rock wall, and at least three putt putt courses. There are also multiple restaurants and bars that you can shuttle to. You could easily stay on the resort the entire time, but I didn’t go to Florida to hang out by the pool for 5 days.

On Sunday Joe and I got groceries for the week so we didn’t have to eat out every day. In the afternoon a group of us decided to explore Reedy Creek Swamp, which is an educational park during the weekdays for students. Due to that it is only open to the public on the weekends. It is a delightful park. Easy walking path and wildlife everywhere! They had some great pamphlets that detailed the local wildlife and plant-life.  As we walked down the path little lizards scurried in front of us. Snakes wrapped themselves around the trees and we saw five alligators in the water.  It was the perfect start of the week! 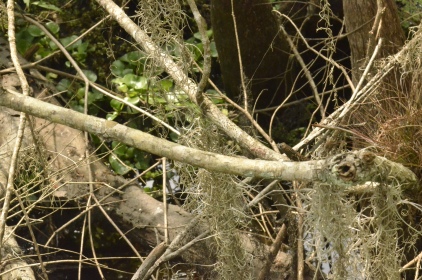 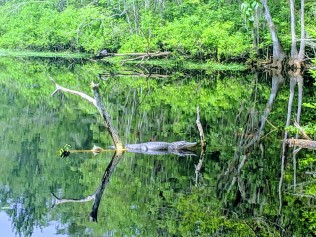 Sunday evening we explored more of the resort. We played putt putt and took a very long walk. When we got back to the room everyone was discussing what they wanted to do on Monday since it was going to be a cloudy and raining day. Most wanted to hit the local theme parks. Joe and I both declined due to watching our funds. Joe’s Mom, dad and sister decided on Animal Kingdom. Another group decided to go to Bush Gardens. Joe and I woke up the next morning to his Aunt Robin calling letting us know she had found a deal for Sea World. Two tickets for $90. It was a hard deal to pass, so we took it. We both got up and made omelets for ourselves. We then made the trip over to Sea World with Robin, Brandon (Joe’s Cousin), Amy (Brandon’s girlfriend), and Joe’s grandparents.

We started by watching the dolphins in the nursery tank. They were adorable! We then rushed to the killer whale show. We were careful not to sit in the splash zone because we didn’t want to wreak our phones and my camera. It was spectacular to watch the whales jump and do flips.  The folks in the splash zone were completely soaked! I noticed several of the whales had bent dorsal fins, but was not sure why. The staff seemed to be very good at working with them. I assumed they were trained marine biologists, but later found out they are animal trainers. I find it peculiar that humans specializing in these amazing animals were not the ones chosen to work with them one one. This is not to demean the trainers who did an amazing job putting on the show.

After the show we moved on to the roller coasters. This was a first for both me and Joe and we both realized something. We love roller coasters! I, of course, screamed my head off. Joe said he had never heard me scream like that before. The first roller coaster was called The Mako and is currently the largest roller coaster in Florida. Amy and I hit up The Infinity ride next (A class “4” man made rapid). It was the shortest line due to being only 60 degrees out, but that didn’t stop us northerners! We hit the ride up twice!

After a quick bite we hit up The Manta ride. By far this was the best ride in the park! We got off the ride we had just enough time to get to the dolphin show, which was very good. In my opinion the whale show was better, but everyone else seemed to disagree with me. We walked down to the area the dolphins are fed. Sadly all the slots were taken for feeding them, but we were able watch. I noticed later when we viewed the dolphins in the underwater aquarium there were odd lines on their bodies. The manatee exhibit was not far so that was next on the list to explore. After hanging out there for a bit I have to admit they are by new favorite ocean animal. For such big creatures they are very graceful. We walked to the stingray area after and were able to pet them. We went to the Manta ride one more time and decided to go to more exhibits. The Antarctica helicopter simulator was a bit too much for Joe and I. For anyone who gets motion sick do not go on this “ride.” The rest of the exhibit was worth the walk. We got to see walruses, seals and much more.

We ended the night by checking out the penguin exhibit. This proved to be our downfall. We decided to go on the ride which was very cool at first, but then proceeded to get stuck. Brandon, Amy and I were on one ride together and had to watch a loop of penguins walking against the wind with dramatic music at least 5 times. We had very little time to see the penguins due to our ride waiting on us. So we had to run out of the park at full speed.

Not a great way to end our Sea World experience, but it was an experience I will not forget. When I returned to the UP I was upset to find out the dark secrets of Sea World. A co-work informed me about a documentary called “Blackfish” and I felt sick that I went to Sea World. It was all a big lie. When the dorsal fin is bent it means the whale is in distress and/or is depressed. The odd lines I saw on the dolphins is called raking. It occurs because they attack each other out of frustration. Please watch the documentary before going to Sea World. It is available on Netflix. If I had seen it before I would never had gone to Sea World. 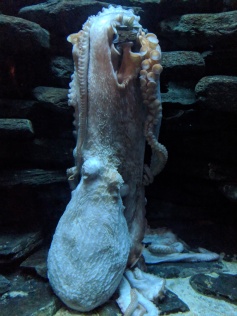 We ended Monday night with frozen pizza and playing games with the family. Tuesday was a very laid back day. We decided to explore Shingle Creek Park. It was an okay park, but honestly does not match the hype we read online. Part of it was the backside of a rather questionable neighborhood. There was a portion that we did not get to explore due to having to leave. The group we were with were planning on going to dinner / bowling and did not want to miss it. Bowling was $20 a person with a 2 hour wait. Oddly enough Joe and I decided to stay at the hotel and make dinner there instead. We walked around, went to the gym and ended the night at Breezes with karaoke. By that I mean I sang while Joe watched. When we got back we hung out with the family and then finally went to bed. 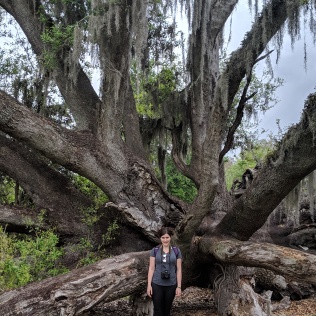 Wednesday was a little more exciting and was probably one of my favorite days in Florida. A group of us traveled to Homosassa Springs and enjoyed the wonders of this state park. The park is next to a fresh water natural spring that leads to the ocean. Due to this it is filled with fresh and salt water fish. There are also a large number of wild manatees there! It was a site to see! The park also has a whole zoo of Florida wildlife and took the better part of the morning to walk all the way through. The only exotic animal there was Lu; the oldest hippopotamus in captivity and only animal who can legally have a drivers license. The cafe on site was also fantastic and very reasonably priced. It cost only $13 to get into the zoo and lunch was less than $20 for both Joe and I. Perfect for the family on a tight budget!

After a delightful visit at Homosassa Springs we found a beach called Pine Isle  Beach. It was a very quiet beach with a lovely view of the ocean. We stayed there for about 3 hours enjoying the sun and the ocean breeze. Unfortunately the wind picked up and we decided to leave the windy beach. 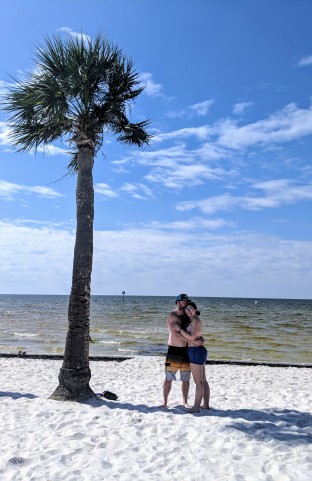 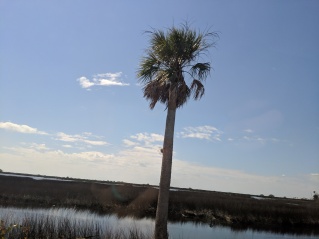 Thursday we spent the whole day at the resort enjoying the sun and pool. I got sushi  for dinner at the restaurant which was not good at all, but the drink I got was divine so that made up for it. I also got fresh salmon for lunch and that was wonderful! On Friday we woke at the crack of dawn and rushed to the airport and our trip was sadly over. 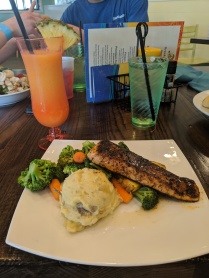 Two goofballs dip their toes into half assed homesteading and attempting to live a more sustainable lifestyle. View more posts